Meet the Author--"Old Breed General: How Marine Corps General William H. Rupertus Broke the Back of the Japanese in World War II From Guadalcanal to Peleliu"

Old Breed General is the biography of Rupertus and the story of the Marines at war in the Pacific.

General William H. Rupertus, USMC, is best known today for writing the US Marine Corps’ Rifleman’s Creed, which begins, “This is my rifle. There are many like it, but this one is mine”—which has been made famous by films such as Full Metal Jacket and Jarhead. Rupertus was one of the outstanding Marines of the 20th century, standing alongside men such as Smedley Butler, Chesty Puller, and Arthur Vandegrift, but he died in 1945, so his story has never been told.

Rupertus “made his bones” in the Marine Corps' “savage wars of peace” before World War II—that is, in Haiti for three years after World War I, in China in 1929 (where he lost his wife and children to the scarlet fever epidemic), and in China again in 1937 (where he witnessed the beginning of Japan’s war against China that turned into the Pacific War of World War II).

In World War II, Rupertus commanded during four important battles: at Tulagi and Henderson Field during the Guadalcanal campaign, at the Battle of Cape Gloucester, and at Peleliu. It was a series of blistering battles—and ultimately victories—that helped break the back of the Japanese and pave the way for American victory.

Over the course of these battles, Rupertus became the Patton of the Pacific—ruthless in war, always on the attack, merciless against the enemy, and undefeated in battles—even as he proved himself very much like Eisenhower: suavely diplomatic and able to balance war with politics. These skills allowed Rupertus to crush the enemy in the malaria-infested jungles of the Pacific and to personally escort Eleanor Roosevelt on her tour of the Pacific.

Old Breed General is the biography of Rupertus and the story of the Marines at war in the Pacific. This is an American story of love, loss, shock, horror, tragedy, and triumph that focuses on Rupertus and the 1st Marine Division in World War II, but which resonates through World War I, Chosin in Korea, and James Mattis’s command in Iraq.

Amy Rupertus Peacock is the granddaughter of General Rupertus and keeper of the family archives. A graduate of the University of Georgia’s journalism school, she has written for various newspapers. She lives in Charlotte, North Carolina.

Don Brown is a former US Navy JAG officer and Special Assistant US Attorney. He has written 14 books, including a series of naval justice novels for Zondervan and the exposé Call Sign Extortion 17. His most recent book is The Last Fighter Pilot, which received coverage in the New York Times, the Washington Post, People, the New York Post, and other publications. He lives in Charlotte, North Carolina.

This program is presented by the Jenny Craig Institute for the Study of War and Democracy. 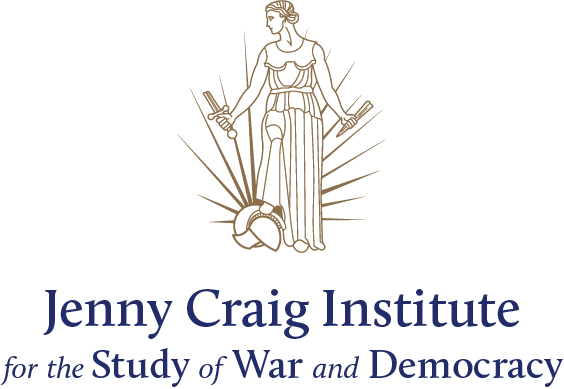